The BE3-RMW features multi-level high-performance SRAM memory with Embedded In-Memory BURST functions for speed and RMW functions for processing data. We combine this with our high-speed serial protocol I/O interface to enable your applications to achieve hyper speed performance. 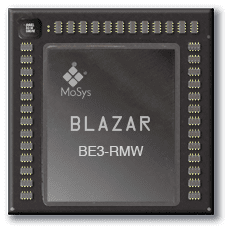 The RMW Functions are focused on DATA COMPUTING where there is need for memory location modification involving RMW in applications such as metering, as well a single or dual counter update for statistics.

The RMW Functions provide at least two levels of speed acceleration. First, the RMW functions can be executed with a single command. Second, since the modification is executed within memory, there is no need to move the data out to be modified, and then back into memory to write. This removes all of the associated I/O latency.

The BE3 RMW and BURST functions are a superset of the BE2 BURST and RMW. We have added 31 new functions. Those in Green are not in the BE2.