The BE2-BURST is a high-performance memory with Embedded In-Memory BURST functions for greater data transfer efficiency. We combine this with our high-speed serial protocol I/O interface to accelerate your application’s performance. 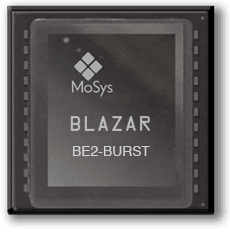 QDR, SRAM provides speed and bandwidth, however the fact that sometimes designers need multiple devices with the high signal pin count needed to get the performance you’re looking for.  MoSys multiport, serial, single-transistor SRAM eliminates all of these issues.